Posted on October 1, 2008 by nimblewillnomad

The Triple Crown Award is recognition of the dedication, commitment, and achievement of those who have completed the three major National Scenic Trails; the Appalachian Trail, the Pacific Crest Trail, and the Continental Divide Trail. ALDHA-West is the only organization that officially recognizes the accomplishment of these few intrepid hikers. At the ALDHA-West Gathering, held each fall, the Triple Crown honorees are recognized and awarded plaques noting their achievement. To view the list of all who have accomplished the Triple Crown, please visit the ALDHA-West website. 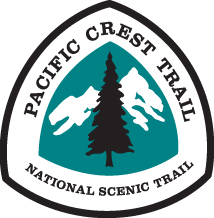 Having hiked the Appalachian Trail in 1998 and the Continental Divide Trail in 2005 and 2007, upon completion of his 2008 Odyssey of the Pacific Crest Trail, the Nimblewill Nomad was added to that short list of intrepid who’ve completed the Triple Crown, the three premier U.S. trails. With his PCT hike coming to a close on September 15, 2008, the Nomad headed to the ALDHA-West Gathering, held at Lake Wenatchee, WA, September 19-21. During this gathering he was recognized for his achievement and received an award plaque. (See photos/video below) 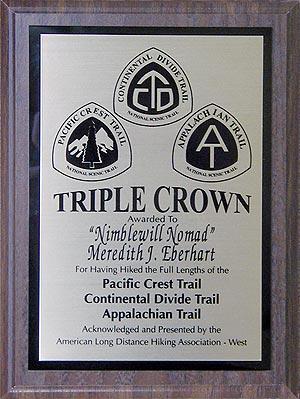 Message from the Nomad: “Achieving the Triple Crown was the greatest accomplishments in my life. Receiving the award will remain the most intensely emotional time in my memory. Thanks to Richard Nopack Anderson for his sponsorship, and a special thanks to Jackie YogiMcDonnell, organizer of the Triple Crown Award program.”

The above photo is of the Nomad accepting his Triple Crown Award at the 2008 ALDHA-West gathering. This photo courtesy of Mad Monte Dodge.

The photo displayed on the screen in the background was taken by Will Richard, the official SIA/IAT photographer and one of Nimblewill Nomad‘s very kind sponsors. The photo was taken of the Nomad at Belle Isle, Newfoundland on his final day, Odyssey 2000-2001, at the conclusion of the 5,400 mile journey, the first known and recorded trek o’er the entire Appalachian Mountain Range. The little mound on which he’s standing is at the northernmost point in the Appalachians, on Belle Isle, in the Labrador Sea. 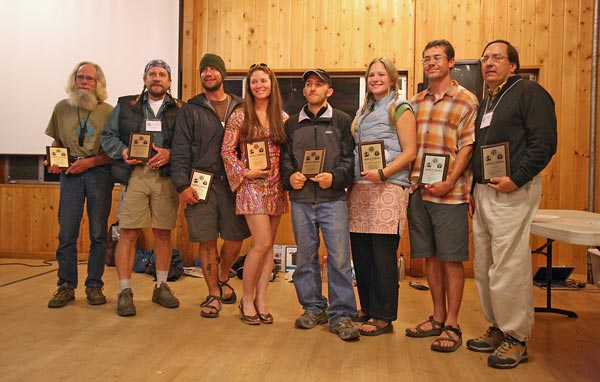 The above photo is of those present to receive their Triple Crown Awards at the 2008 ALDHA-West Gathering.

* Some Triple Crown recipients were not available for photo. View complete list for 2008.

* Dick “Nopack” Anderson was the Nomad‘s sponsor at the award ceremony. Since he was not able to attend, he wrote a short speech that was given. That speech and other photos are available through 2008 article on the IAT/SIA website.

The 2008 ALDHA-West Gathering, held this year at Lake Wenatchee, Washington, was attended by over 80 hikers, including many of this years’ thru-hikers and 8 new Triple Crown recipients.

Nimblewill Nomad started the events Friday evening, after dinner, opening with insights, poetry and prose on the physical, mental and spiritual aspects of the long distance hiking experience. Other events were presented by some who spun tales of their adventures, demonstrated trail stoves and cooking techniques, recipes, photography, and a panel discussion on The Evolution of Long Distance Backpacking.

But the main event of the weekend was the presentation of the Triple Crown awards. Eight incredibly diverse hikers accomplished the feat of completing the AT, PCT and the CDT, among them the Nimblewill Nomad. The recipients stood and received their award plaques to the thunderous applause of the other hikers. This video was taken by Kevin Bear Spotter Clayton, as the Nomad received his award.

When You Wish Upon a Star