Posted on July 6, 2017 by nimblewillnomad

Route 66 was (and remains) the highway we simply cannot forget. From the very beginning it has occupied a special place in the American conscience. It epitomizes (and cuts right across) the heart of America, the very soul of this great nation. From the skyscrapers of Chicago, through the cornfields of Illinois, the lush Ozark hills, the heartland of Kansas, Oklahoma, and Texas, the southern reaches of the Rockies, the pine forests of Arizona, the desert Southwest, and on to the golden shores of the Pacific, Route 66 winds its way through a marvelous cross section of America. It passes by small towns in the Midwest, the arid Native American lands, the natural wonder of the Grand Canyon, as well as the bustling streets of Chicago, St. Louis, Oklahoma City, Albuquerque and Los Angeles. It embodies the core values of America, of those “good old days,” with its mom-n-pop service stations, motor courts, diners, souvenir shops and trading posts. Historic Route 66 is, in itself, an icon of American culture. It truly is America’s Main Street.

Historic Route 66 lives on to tell a thousand stories–of hope and heartbreak, of love and hate, of starting over, of new dreams found around the next bend, beyond the hazy blue. Route 66 is our story; it embodies what makes us a great nation. Like so many of our old 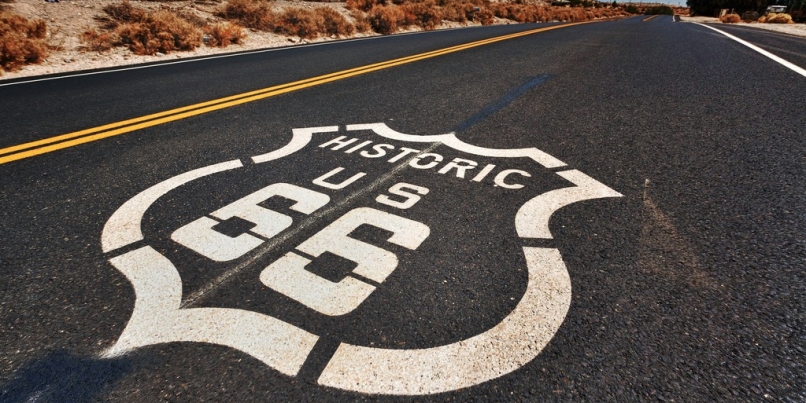 trails/roads of the past–the Oregon, Santa Fe, Pony Express–Route 66 will live on in our collective memories. Ah, and isn’t it interesting that no other culture has ever experienced this type of love affair with the open road–indeed, with freedom.

The story of Route 66 had its beginning nearly two centuries ago, when our young country began migrating westward. The vast unexplored lands beyond the Mississippi River fired the imagination of the American people. Out of the ruts of the National Old

Trails Road, which was laid down over the traces and trails blazed by our early explorers, mountain men, trappers, missionaries and pioneers, Route 66 was born. It became the twentieth century version of the Oregon Trail, the golden road to the Promised Land. The early years of Route 66 coincided with unparalleled economic strife and global instability, yet it hastened the most comprehensive westward movement and economic growth in U.S. history. Like the early, long-gone trails of the nineteenth century, Route 66 helped spirit a permanent mass relocation–west. Known affectionately throughout the years as The Mother Road, Main Street of America, and the Will Rogers Highway, to this day does Route 66 live on in our collective memories–as an experience, a feeling, a perception, a marvel of sight and sound, and a mystery that can only be least appreciated and understood by traveling it.

Historic Route 66 passes through eight states, Illinois, Missouri, Kansas, Oklahoma, Texas, New Mexico, Arizona, and California. Traveling (or hiking) the remains of this old highway today provides a glimpse into the past, a simpler, more laid-back time, the way America was before the rushing hell of our  interstate highways. Back then, road travel was not the monotony of endless miles. Instead, it was a journey in itself, through towns 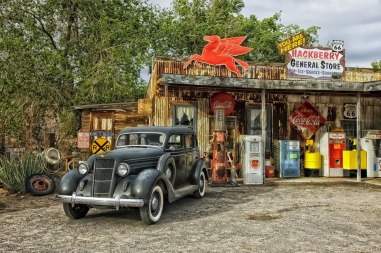 and little villages with their motor courts, eye-catching signs, diners and bars with odd names, and lots of souvenir shops and trading posts–an amazing diversity of people and landscapes. Over the 50 or so years of its existence, the road underwent many improvements and realignments, which changed its path and overall length. By 1970, nearly all segments of the original road were bypassed by modern four-lane highways, and by 1984, the remaining vestiges of Route 66 were either given up or paved over by the interstate. Route 66 was finally decommissioned in 1985–and the familiar Route 66 markers came down.

No highway in the history of our nation is as fabled as Route 66. It has been immortalized in song, literature; there was even a TV series. In 1946, Bobby Troup, former pianist with the Tommy Dorsey orchestra, composed a song with the catch phrase “Get your kicks on Route 66.” John Steinbeck, in his 1939 novel, Grapes of Wrath, called Route 66 the Mother Road. His book, combined with the 1940 film of the epic journey of the Joad family during the Dust Bowl/Great Depression, served to immortalize Route 66 in the American conscious. “Route 66,” a popular television series during the early 1960’s, drove into the living rooms of America every Friday evening. The theme song for the series “Open Highway” made Billboard magazine’s Top-30. “Cars,” a computer-animated (Route 66) comedy-adventure was released by Disney in 2006. The original production, plus retail merchandise sales topped ten billion dollars. Known as “The Verse by the Side of the Road,” Burma-Shave was a brand of brushless shaving cream that was sold from 1925 to 1966.  The company became known for its innovative advertising campaign, which included rhymes posted all along the nation’s roadways. Typically, six small fencepost-supported signs were erected, the first five containing a line of verse, and the sixth displaying the brand name. Here are a couple that I remember seeing along Route 66: IN THIS OLD WORLD – OF TOIL AND SIN – YOUR HEAD GROWS BALD – BUT 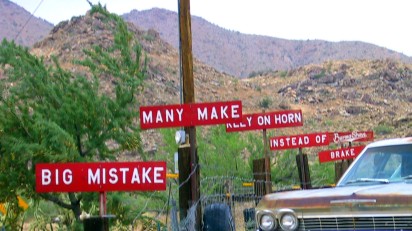 NOT YOUR CHIN – Burma-Shave and BIG MISTAKE – MANY MAKE – RELY ON HORN – INSTEAD OF BREAK – Burma Shave. And who hasn’t visited or heard about Meramec Caverns? The caverns became well known early on through another unique advertising technique–barn murals. Although advertising signs on barns aren’t permitted in most states today, those along Historic Route 66 that promoted Meramec Caverns–many of those still exist, defying time.

Route 66, the nostalgia and romance surrounding it, continues to capture the imagination of people around the world. Though it long ago ceased to be, Route 66 has retained its mystique. Steeped in history, nostalgia and romance, the highway has become an American icon, pure Americana, celebrating the golden age of the open road.

So, folks, that’s a bit of history about Historic Route 66. I can remember the old highway, the way it was, as I had the pleasure of motoring stretches of it back in my youth–in my ’53 Ford. That was during the late ‘50s and early ‘60s, the heyday for the old highway. It was THE highway back then. To this day, does it beckon me still! Ah, and now on to Odyssey 2017, Nimblewill’s adventure along Historic Route 66:

Beginning July 27th, from downtown Chicago (eastern terminus of Route 66), I’ll shoulder my meager pack and head for Santa Monica. This journey is destined to take some 124 days, covering around 2,300 miles. Maps for this odyssey, plus my itinerary are posted here. So, along with daily journal entries and photos, you’ll be able to track me and follow along. And please do–Your support and encouragement has always provided great energy