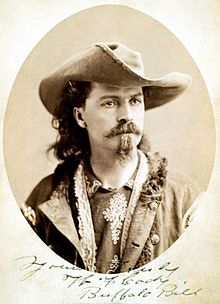 Probably more than any other rider in the Pony Express, William Cody (better known as Buffalo Bill) epitomizes the legend and the folklore, be it fact or fiction, of the Pony Express.[51][52] Numerous stories have been told of young Cody’s adventures as a Pony Express rider. At the age of 15 Cody was on his way west to California when he met Pony Express agents along the way and signed on with the company. Cody helped in the construction of several way-stations. Thereafter, he was employed as a rider and was given a short 45-mile (72 km) delivery run from the township of Julesburg which lay to the west. After some months he was transferred to Slade’s Division in Wyoming where he made the longest non-stop ride from Red Buttes Station to Rocky Ridge Station and back when he found that his relief rider had been killed. The distance of 322 miles (518 km) over one of the most dangerous sections of the entire trail was completed in 21 hours and 40 minutes, and 21 horses were required to complete this section.[23] Cody was present for many significant chapters in early western history, including the gold rush, the building of the railroads and cattle herding on the Great Plains. A career as a scout for the Army under General Phillip Sheridan following the Civil War earned him his nickname and established his notoriety as a frontiersman.[53][54][55]