Posted on June 8, 2021 by nimblewillnomad

Well, I’ll tell you what: Daleville is a gold star hiker town! Coming in by trail and reaching US-220, looking to the right there’s a Howard Johnson Express and a Motel 8. Only a block or two away there’s a Kroger plus most fast food restaurants. And by golly, hikers are welcome in Daleville. How about that! 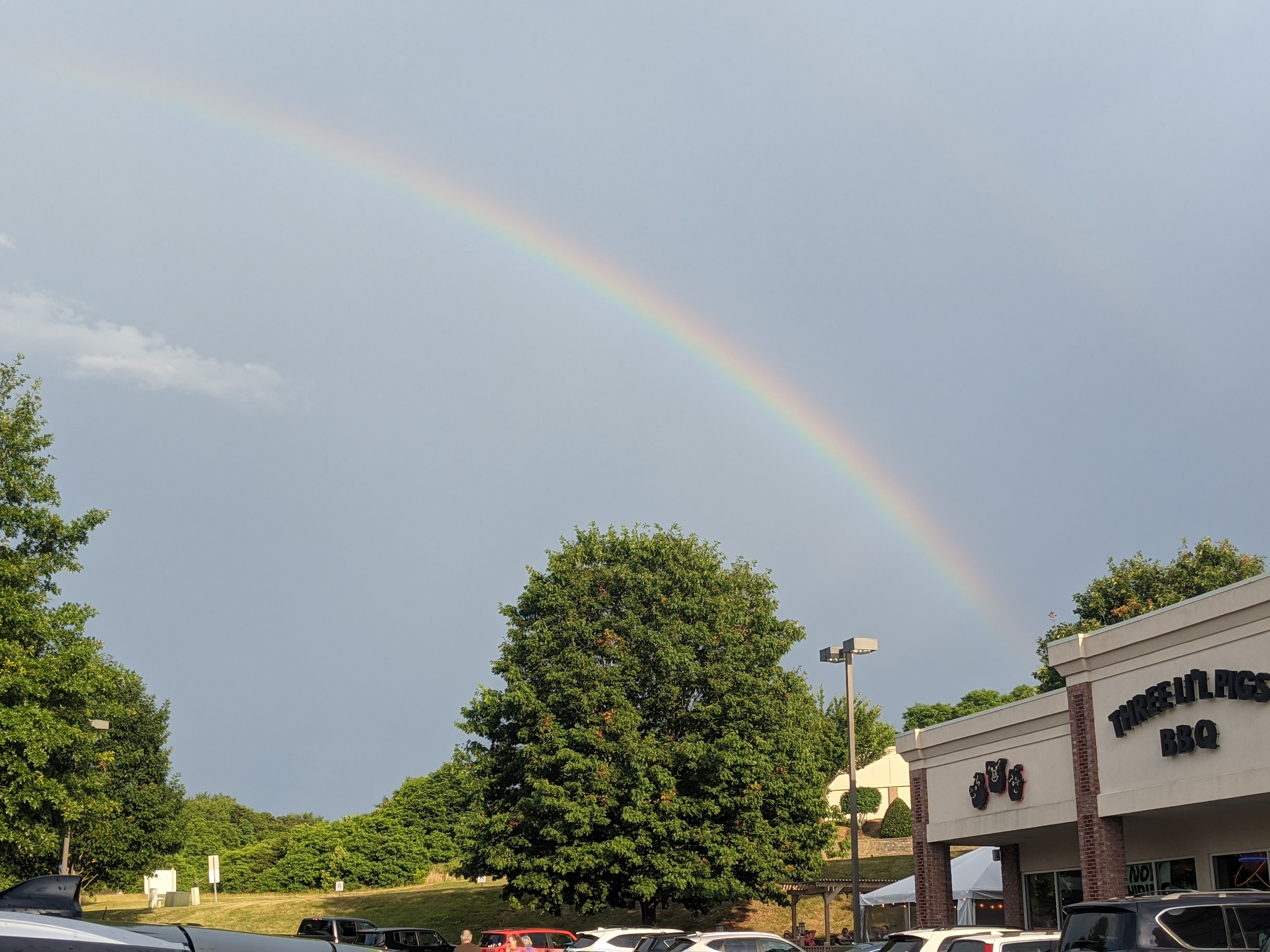 This will be our (me, Nathan, Kimm) second night at Motel 8. Highly recommend it; a fine place. We’ve been to Three Li’l Pigs BBQ and Angelle’s Diner. Both are great local establishments. Three Li’l Pigs offers complimentary banana cream dessert to thru-hikers! Yup, just a mighty fine trail town.

Another climb first thing this morning to Fullhardt Knob. Then comes a bunch of ups and downs across spurs and into ravines, with the last climb (before reaching the Blue Ridge Parkway) being in excess of 800 feet.

A few decades ago a bunch of like-minded long distance hikers (mostly retired military fellows) put together a loosely organized group that became known as the “Blue Blazin’ Hobo Hiker Trash from Hell.” I had the great pleasure of joining them back in ’98 (by fulfilling the two main requirements): 1. Claim to be a long distance hiker, and 2. Profess to going some other way than the AT white blazes at some point on your thru-hike. I managed to meet both. I certainly was considered a long distance hiker, and while hiking the trail next to the Blue Ridge Parkway, I veered over to the Parkway to road walk it a fair distance (blue blazing). 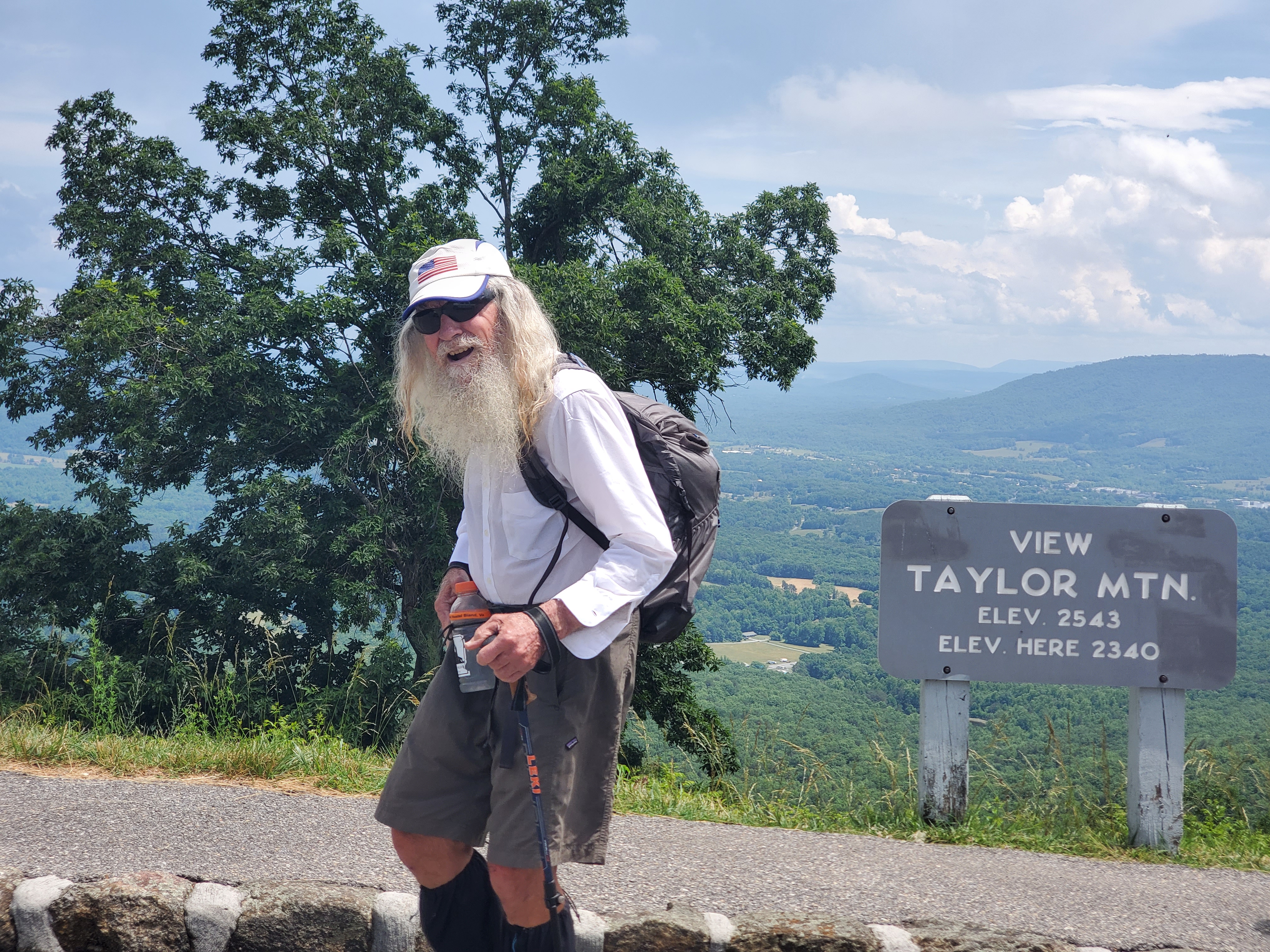 Well, today, after over two decades of delinquency I decide to reactivate my membership by hiking the Blue Ridge Parkway again, from Taylor’s Mountain Overlook to Peaks of Otter Overlook, a distance of some five miles. This short section of the AT is little more than a stepchild of the Parkway, following along below it, the views being mostly of the Parkway culvert pipes. And from the parkway there? Glorious vistas–Taylor Mountain, Pine Tree Overlook, and the magnificent and mystifyingly Peaks of Otter (from where can be heard the Pipes of Pan). None of these views can be clearly seen from the trail.

Of course, this whole hiker trash thing came to be in order to add a bit of levity to the (serious) notion that to truly hike from Georgia to Maine, one had to follow the exact AT path and pass every AT white blaze. Well, today there remain a few hard noses who can’t (or who refuse to) wrap their heads around the casual “Blue Blazin’ Hobo Hiker Trash” approach. Ahh, but there are fewer and fewer of them!

What a wonderful day I’ve just spent on the AT. As I arrive the Peaks of Otter Overlook Nathan and Kimm are relaxing, enjoying the view across the Meadows of Dan–to the mystic Peaks of Otter…

Far o’er the Peaks of Otter,
Across the Meadows of Dan,
Hark, from afar they beckon–
The mysterious Pipes of Pan.
(N. Nomad)