Posted on July 7, 2016 by nimblewillnomad 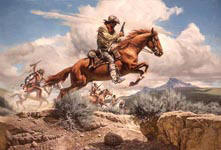 The Pony Express Trail–a fading, rutted 1900-mile track that’s slowly disappearing into the shadows (and annals) of American history. It began in St. Joseph, Missouri, from there to join and generally follow the then-existing Oregon/California Trail to Fort Bridger, Wyoming. From Fort Bridger outpost it turned to follow the Mormon Pioneer Trail (the Hastings Cutoff) to Salt Lake City, Utah. From the Mormon community in Salt Lake City it continued across that high plains desert no-man’s-land that stretches over 500 miles from Salt Lake City to Carson City, Nevada. That trail segment (and this year’s odyssey for Nimblewill and Bart) was known as the Central Overland Route. From Carson City it crossed the Sierra Nevada down and  into Sacramento, California.

This segmented trail was created to facilitate the delivery of mail to the burgeoning (and isolated) far West. The remarkable relay-ride by horseback took only 10 days, unprecedented for the time! Relays were divided into segments of 75 to 100 miles in length over which a lone rider would race, changing horses at established stations every 15 miles or so. The rider would then hand off the mochila (a waterproof saddlebag containing the mail) to the next (fresh and rested) rider. He then awaited the rider coming from the other direction, to race that mail pouch back to his home station, and from there, to begin the process all over again.

The “Pony” was designated a National Historic Trail through the National Trails System Act of 2009 (amended), and is administered by the Secretary of Interior, the NPS, BLM, and is now marked and maintained to immortalize that incredible journey daily undertaken and suffered by dozens of brave, young (pony) riders. And, although it was in operation only 19 months (April 1860 to November 1861 — the transcontinental telegraph spelled its demise) to this day does the romance and folklore of it remain a legendary chapter in American history. 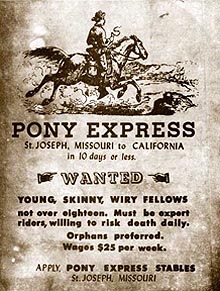 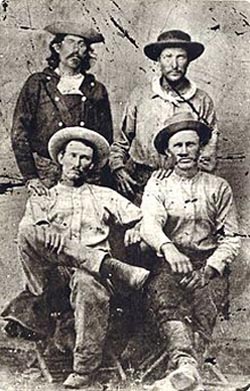 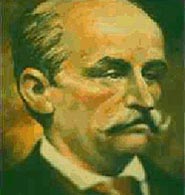